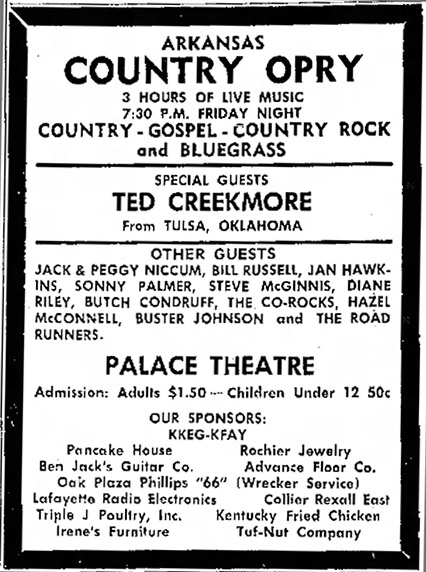 When the Arkansas Country Opry advertised its show at the Palace Theatre on the Fayetteville Square, among the featured guests was classmate Stephen McGinnis, who played fiddle. The ad appeared in the March 29, 1973, edition of the Northwest Arkansas Times.

The caption for this photo is a bit faded, so here’s the transcript:

Fayetteville High School band students are preparing for special half-time activities at the football game between Fayetteville and Blytheville tonight at Harmon Playfield. Among those who will participate in the patriotic program are from left, (front row), Jay Smith, Tom Pitts, Lynn Fox, (back row) Sarah Huckleberry, Harold Steward, Melissa Upchurch and Steve Cox. The activities will be centered around the nation’s bicentennial celebration and a large fireworks display is planned, and majorettes will be twirling fire batons. Also planned are performances by the rifle team, military drill team and color guard of the ROTC at the University of Arkansas. Kick off time is 8 p.m. The band is directed by Herbert Lunday. (TIMES photo by Chuck Cunningham)

Email us at FayettevilleClassof76@gmail.com with questions or suggestions. We have a Facebook Group for general class discussions and a Facebook Page for information specific to the reunion.
Loading Comments...